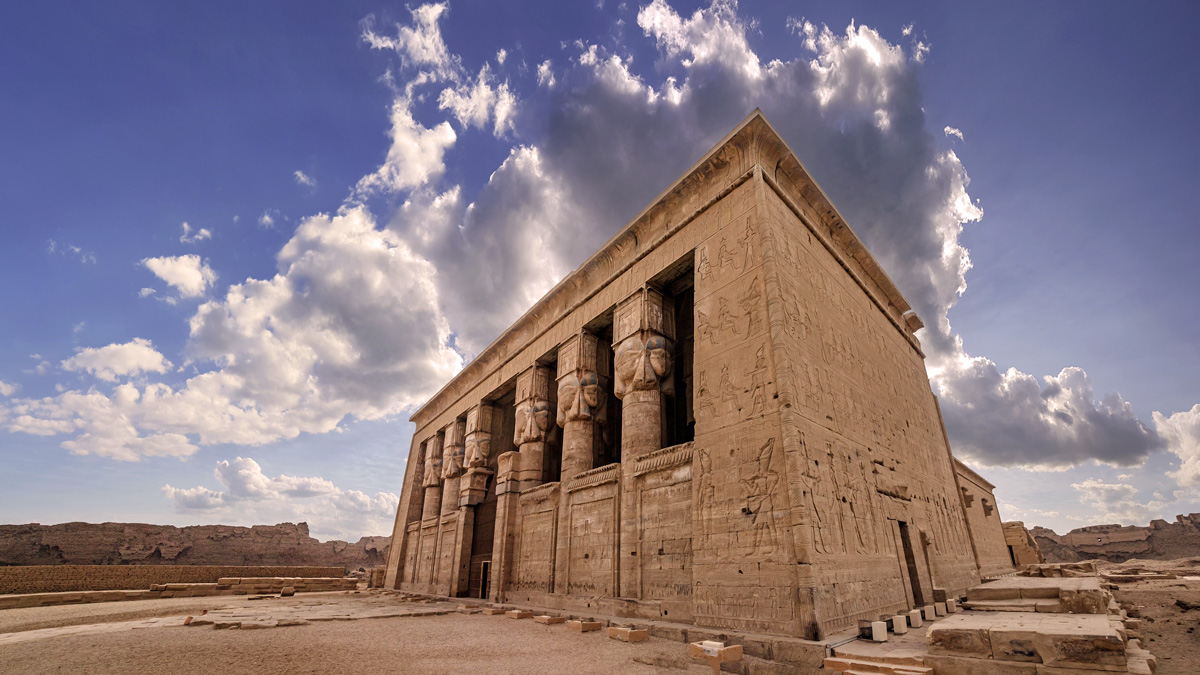 Temple of Hathor in Dendera

The Temple of Hathor in Dendera is the dominant building of the Dendera temple complex and was together with the Temple of Seti I in Abydos and Saqqara one of the few places of pilgrimage of healing in Ancient Egypt. It is located on the west bank of the Nile about 60 km north of modern-day Luxor (ancient Thebes). The most ancient remains of the complex possibly date back to the Old Kingdom (c. 2613-2181 BCE). The Temple of Hathor is especially known from the sculptured Dendera zodiac as the cycle of life and the subterranean crypts of which crypt number 4 has reliefs sometimes known as the Dendera light or ancient Egyptian lightbulb because of its controversial display on the wall. The relief is a combined mythological depiction of the lotus flower, the djed pillar and a snake within an elongated sphere. Because of its size, it is not likely that it is an actual life-size representation of an ancient Egyptian lightbulb. 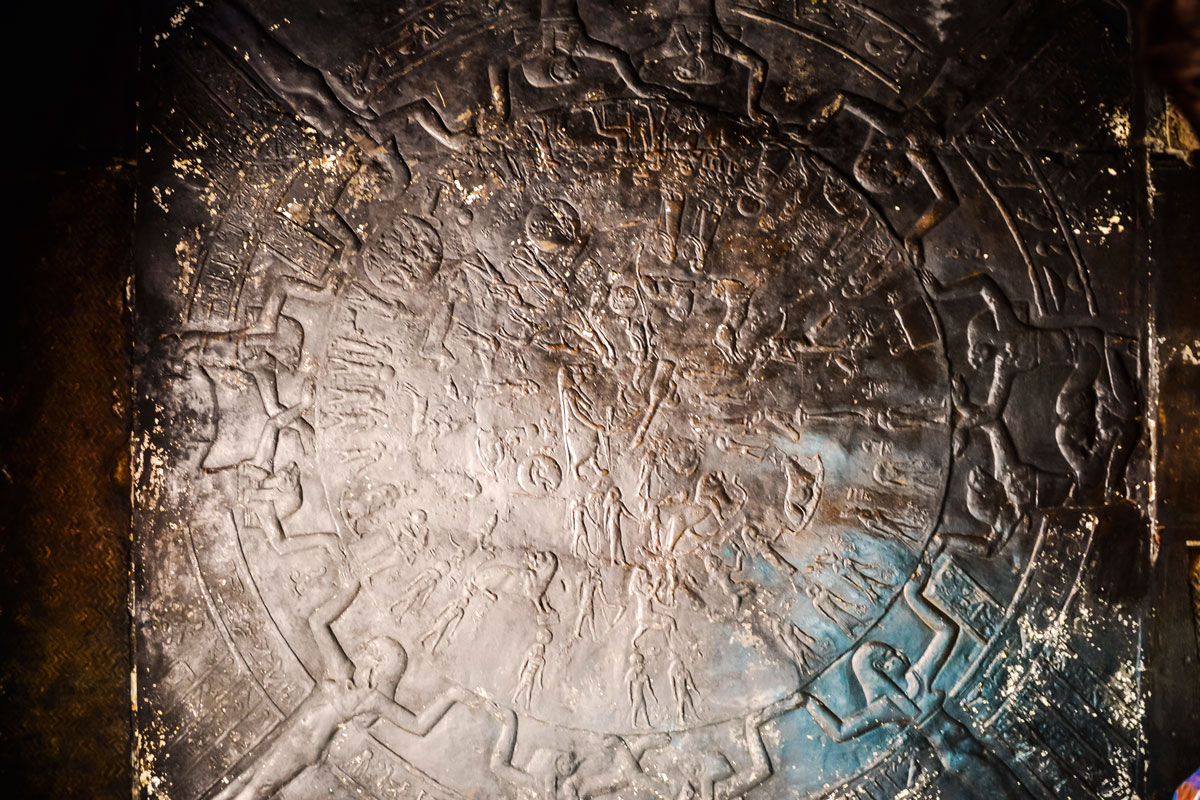 The Dendera Zodiac – the Cycle of Life

The wonderful richly decorated walls and ceilings in the Hathor temple are complete stories from Egyptian mythology that could have been intended as a distraction for people who were treated in this temple and had to sit or lie down. For sick children as well as sick women or women who had to rest after treatment or delivery and who had to lie on their backs, these were easy to read picture books of Egyptian mythology. 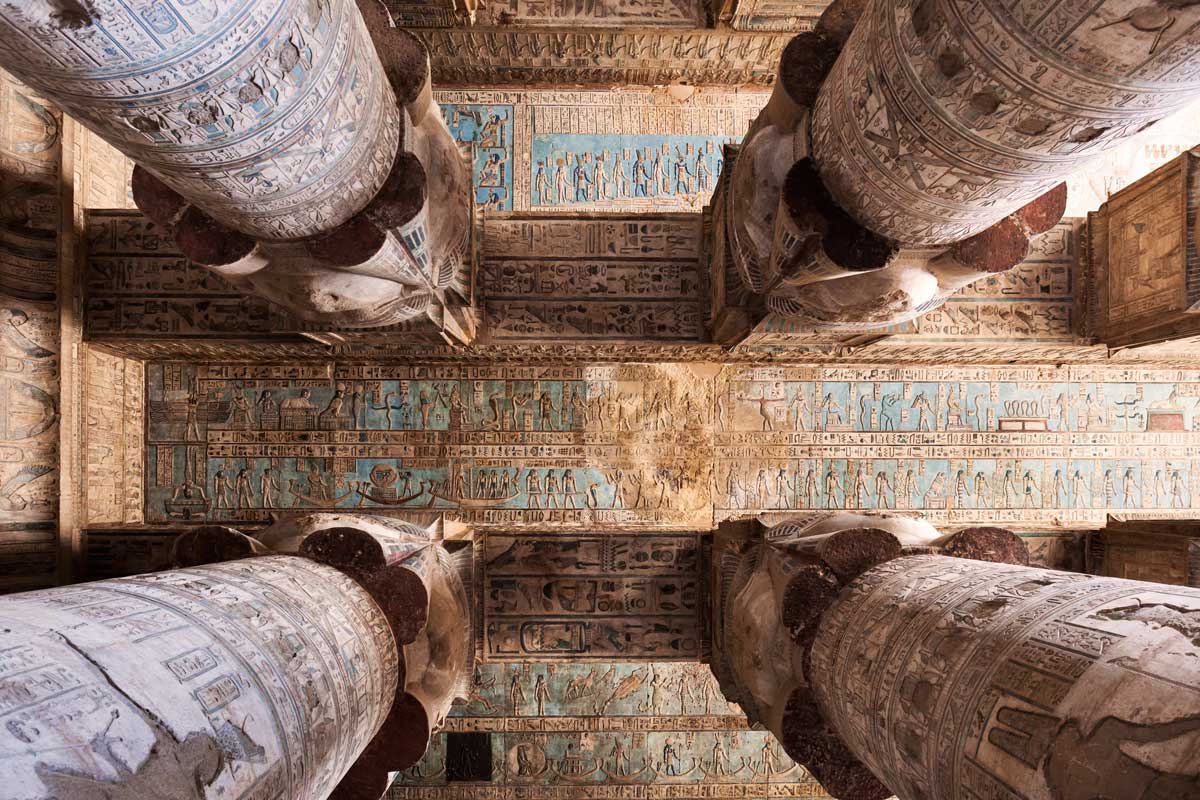 Beneath the temple, there are fourteen subterranean crypts of which eleven are richly decorated. Many decorations feature the sistrum, the sacred musical percussion instrument of Hathor and of objects that were most likely stored in these chambers. Most of the crypts had hidden entrances in the pavement whereby the crypts were believed to be used to conceal special and sacred objects. Why were these crypts not accessible to everyone entering the main temple? It is not inconceivable that sacred rituals were performed in these crypts by priests or priestesses. Are secret and intense medical treatments or childbirths part of sacred rituals?

Depictions in crypt no. 4

The current Dendera complex with its grand entrance, beautiful reliefs, hieroglyphs, gigantic Hathor headed columns, and decorated ceilings dates to the Ptolemaic and Roman periods during the reign of Ptolemy XII and Cleopatra VII. There are several carvings on the temple walls depicting Cleopatra VII and her son, Ptolemy XV or Caesarion (‘little Caesar’). Regardless of rumors, Julius Caesar himself officially recognised this child as his son. It is said that Caesarion was born in the Temple of Hathor. Could his name be associated with a sacred ritual performed in one of the crypts, a sacred ritual called caesarean section or caesarean delivery? The caesarean section is the surgical delivery of a baby by an incision through the woman’s abdomen and uterus. In subterranean crypt number 4, there is a depiction of Heket, the ancient Egyptian goddess of childbirth and fertility depicted as a frog, or a woman with the head of a frog. In ancient Egypt, the frog was a symbol of fertility, water and renewal. This frog goddess of childbirth has two knives or scalpels in both hands which may indicate surgical delivery of a baby. 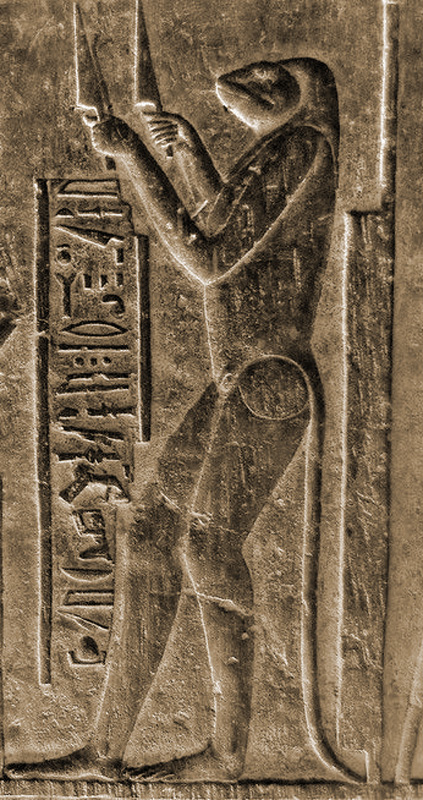 In ancient Egypt, the flower extract of the mythical sacred blue Egyptian lotus (nymphaea caerulea) as depicted in numerous reliefs, stone carvings and paintings had a calming effect and was also used for medicinal purposes. The calming effect is much like the drug Ecstasy (MDMA) and some say it has a stimulant-like effect. The blue lotus contains psychoactive substances (alkaloids) which make it a natural anti-anxiety and stress reliever, but also a pain reliever. It helps with menstrual problems and it is an antidiuretic which helps to control blood pressure and the kidneys to manage the amount of water in your body. An ideal natural sedative at childbirths and minor surgery.

“The depictions of the so-called lightbulbs in crypt no. 4 are representations of the female reproductive system including a human sperm cell depicted as the snake” 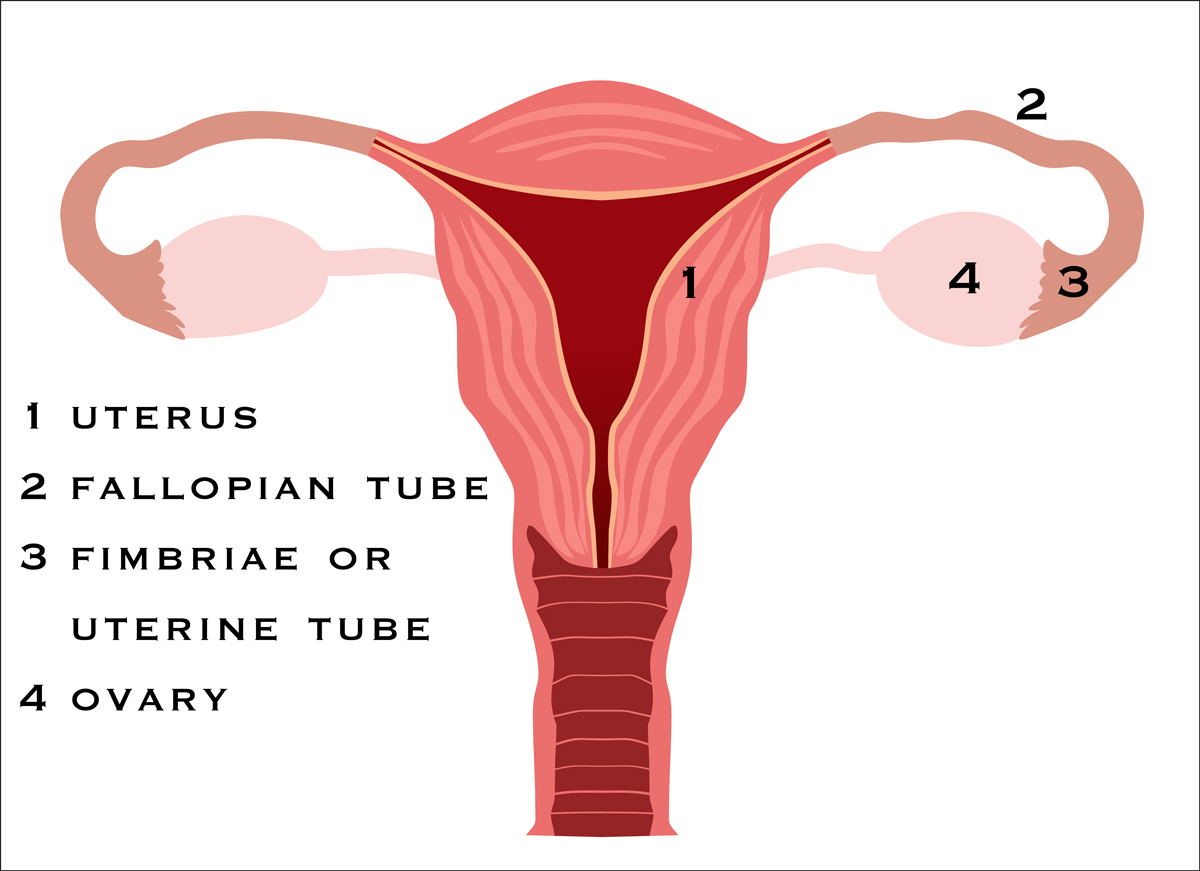 The creation of new life in which the serpent, in ancient mythology, symbolises wisdom, death, resurrection, fertility, and procreation. The four earthly elements of creation are represented by the djed pillar supporting the emergence of new life 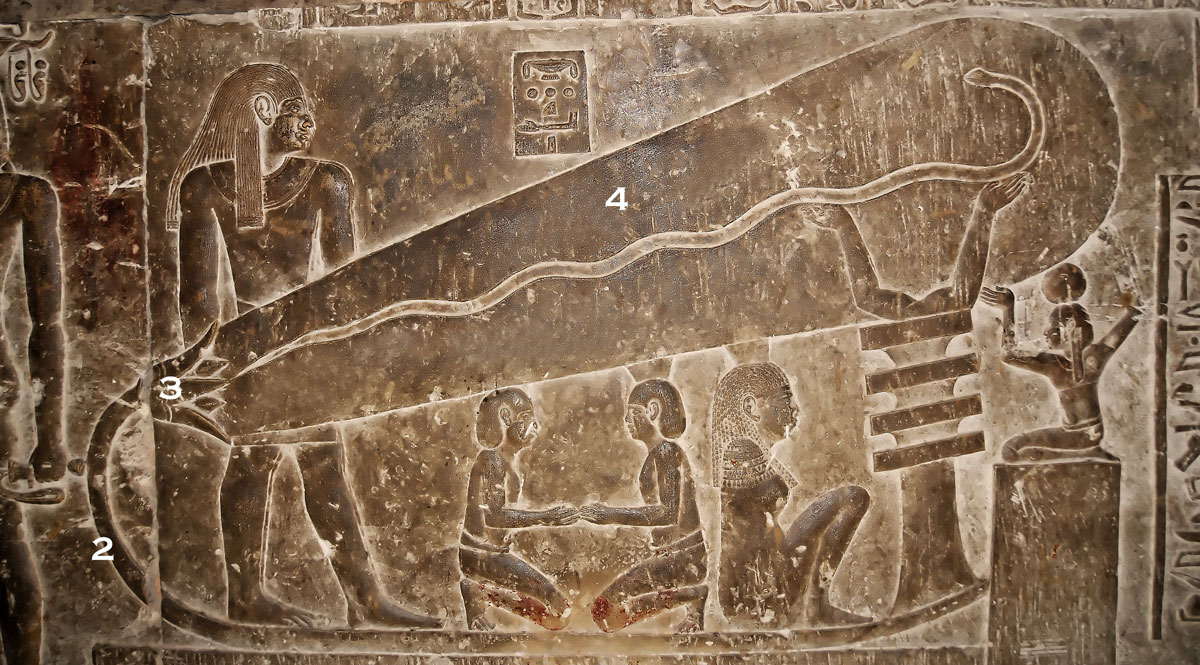 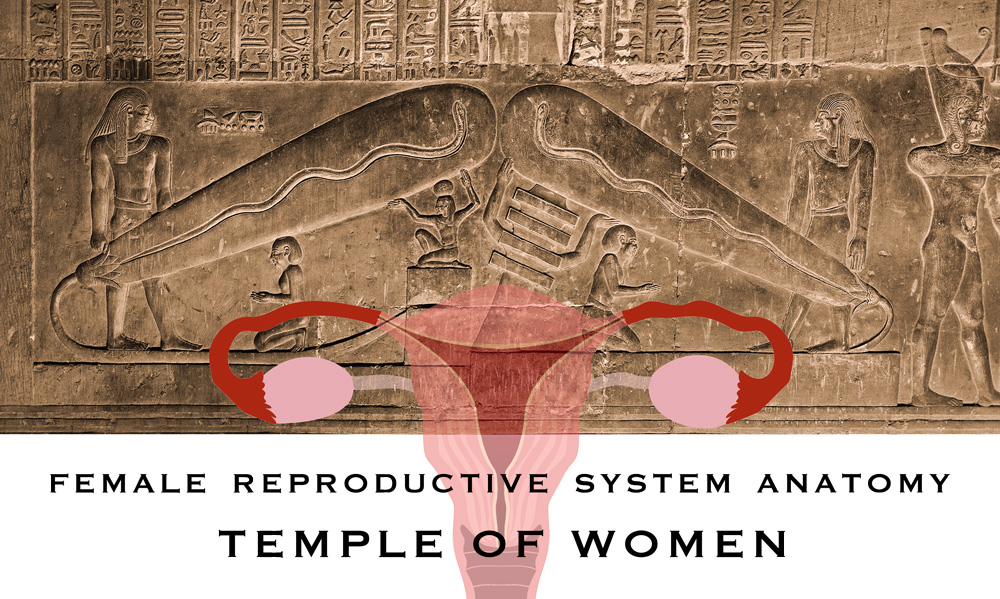 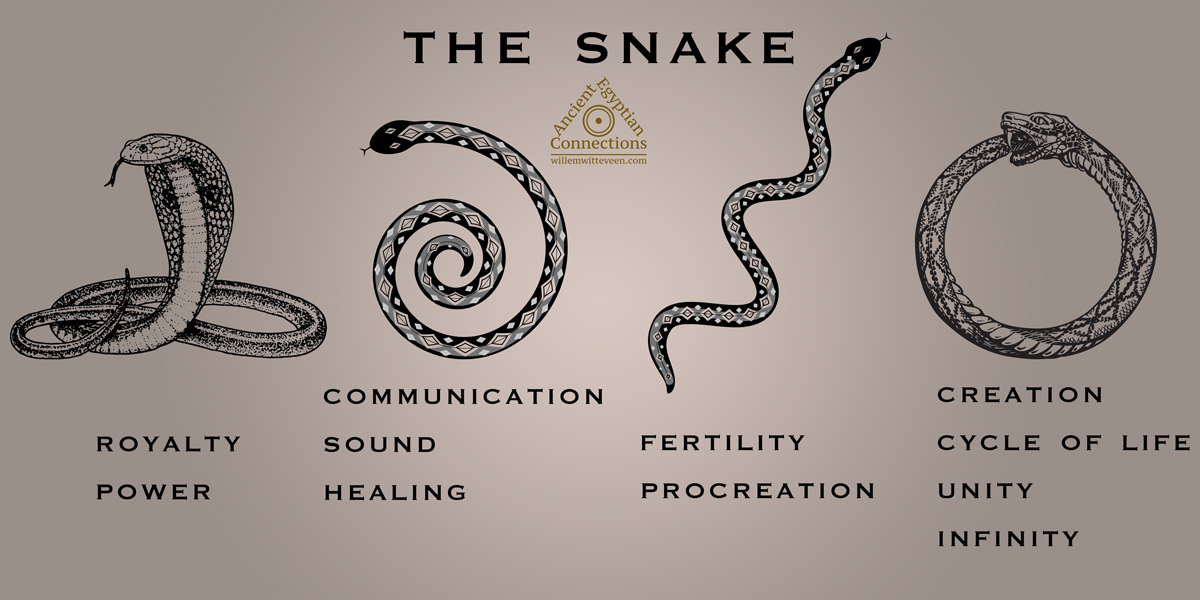 There is no lightbulb or display of electrical energy. It is an enlarged representation of the female reproductive system in which the snake symbolises fertility and procreation. The depiction of the snake in this particular form corresponds to the human sperm cell

Together with the snake or serpent, the lotus flower symbolises healing, fertility, procreation, and regeneration and for that reason, Nefertem, the Egyptian god of healing, medicine and beauty with the lotus flower on his head was also called the Lotus God of Healing. Nefertem was seen as the son of the creator god Ptah and the goddesses Sekhmet and Bastet were sometimes referred to as his mother. In Egyptian creation myths, the blue lotus flower also symbolises creation, reincarnation, and rebirth as it emerged from the primordial waters to bloom after which light (the Sun) appeared thus ending the darkness of the Earth. The yellow centre of the Egyptian blue lotus resembles the Sun, the light that appeared according to the myth of creation. In the evening the flower closes and disappears underwater while at dawn it rises and opens again. The perfect ‘cycle of life’ controlled by the creator, the Sun. Isis as one of the main goddesses of the Osiris myth, was believed to be born out of a lotus flower. Tutankhamun’s body was found to be covered with blue lotus petals when his tomb was first opened in 1922 because the lotus flower was also associated with the dead entering the underworld to be reborn. In the Egyptian language, the blue lotus was called ‘seshen’, the symbol of Upper Egypt and representing creation, healing, and rebirth. 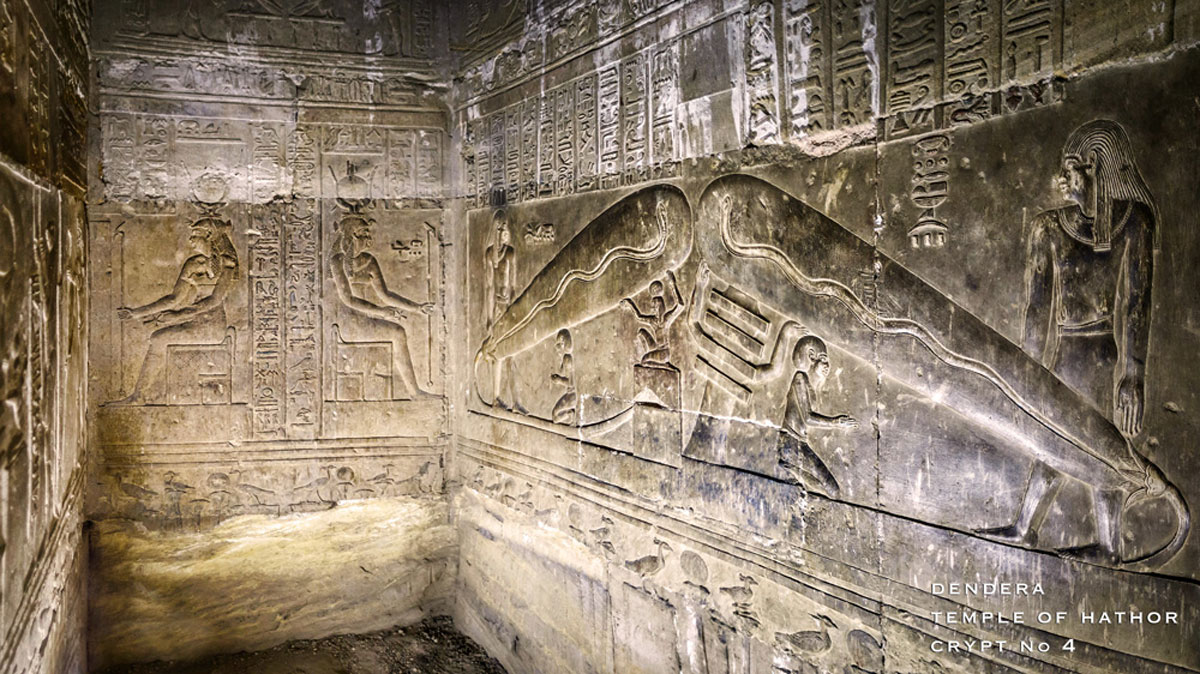 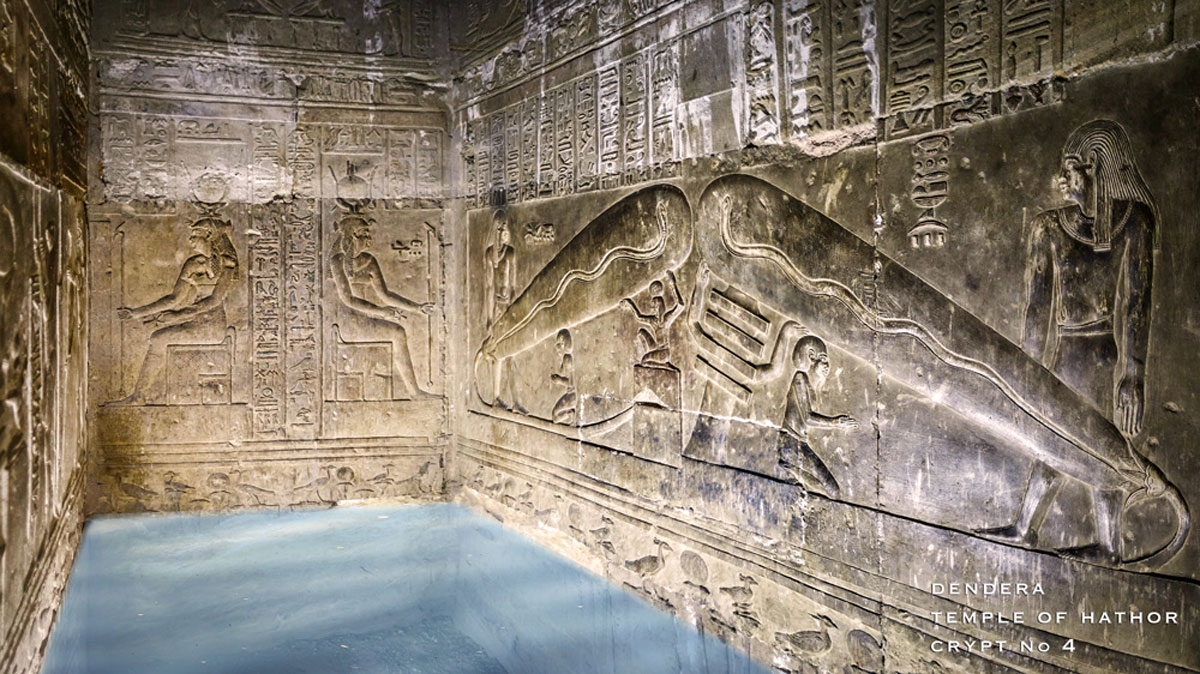 If you look closely at the lower part of crypt no. 4, it seems that it was partially filled with water up to the line with the lotus flowers and water birds thus creating the illusion that they float on the surface of the water. Was crypt no. 4 a water-filled crypt with a depth of approximately 60 to 70 cm to allow women to give birth in (warm) water in a natural and relaxing way and to relieve the pain of labor. When giving birth in water, women also feel supported by the surrounding water. It was easier to fill a crypt with water than a chamber in the main temple and in a crypt, it was easier to maintain a water temperature of about 37 degrees Celsius. Cleopatra VII gave birth to her son Caesarion in the Temple of Hathor in Dendera on 23 June 47 BCE. It is said that she gave birth to her son in water. Legends describe that Cleopatra laid the foundation for a new trend which was the childbirth in water. Some researchers like Janet Balaskas, a writer on water births and founder of the Active Birth Movement, claim that it existed much longer in ancient civilisations and that some pharaohs were also born in water. In some parts of the world, women still go to a special place at the river to give birth. The potential benefits of waterbirths for mother and baby are numerous.

“The Temple of Hathor was designed for women who needed help in healing, childbirth, protection, and support”