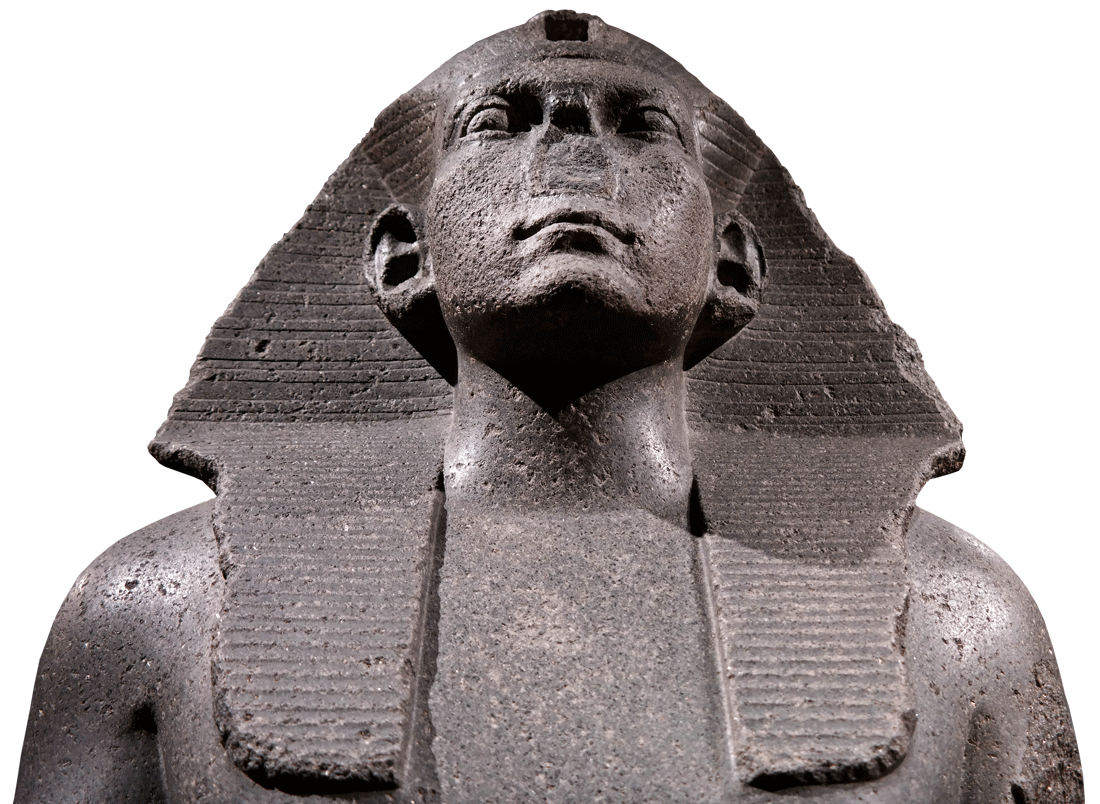 For the ancient Egyptians, a person’s life was composed of five distinct aspects: the physical body (Khat), the shadow (Shuyet), the name (Ren), the physical part of the soul (Ba) and the spiritual part of the soul (Ka).
The Egyptian concept of life and death is not always clear and sometimes two more aspects are added: the heart (Ib) and the fully united soul, consisting of the fusion of the Ka and the Ba after a person’s death (Akh).
All of these aspects had to be preserved after death and were only applicable to important individuals who could afford to be mummified such as important officials, priests and members of the royal family.

The body had to be kept in good condition to function as a ‘new body’ in another world in which all of the above-mentioned aspects could be reunited. When a body dies, all aspects are separated. Therefore, to keep the physical body in good condition, it was mummified.

The shadow is directly linked to the body or image, which represents the deceased and is therefore always present. According to the ancient Egyptians, the shadow contains everything that a person represents, and murals or statues of a deceased person were also referred to as shadows. Those without shadow do not exist and therefore some pharaohs had a so-called ‘shadow box’ in their tomb in which part of their shadow was stored.

The name of the deceased was an important aspect that was given at birth and should always be displayed on murals and statues of the person concerned.
Everything was put in place to protect and maintain the name through writings and cartouches. The ‘Book of Breathings’ as a derivative of the Egyptian Book of the Dead was an important means to ensure the survival of a person’s name. Removing a name from a temple, tomb or image, as happened many times by the subsequent pharaoh, was a terrible event for the deceased. There are countless examples in ancient Egyptian temples and monuments where the pharaoh’s names were removed by their successors, so they could easily own a temple without building a new one. Therefore, the name of a pharaoh was often repeated and displayed in as many places as possible to ensure that the name continued to be read and spoken. In today’s funeral rituals, the deceased’s name is the only aspect of a person that continues to exist through a tombstone or plaquette. In our modern society, the other aspects are of no significance.

The Egyptian concept of life and death is very complicated and therefore there are several interpretations of the Ba, Ka and Akh aspects

The Ba and the Ka are the two main aspects of a person’s soul. The Ba is the physical part of the soul that was displayed as a bird with the head of a human being, and as such was able to travel as a soul between heaven and earth. The Ba is thus the only aspect of the deceased which can move freely. In order to be able to move and survive in the afterlife, the Ba needed food which was realised by offerings to the deceased. The Ba often swirled among relatives and friends in the physical world, and was the only ‘connection’ between the real world and the afterlife in which they were able to assume different forms. In fact, the Ba was the moving part of the deceased’s soul, while the Ka represented the life force and the spiritual part of the soul administered at birth as the first breath of life. Only during the day the Ba was allowed to leave the tomb to be among the living while the Ka remained in the tomb. 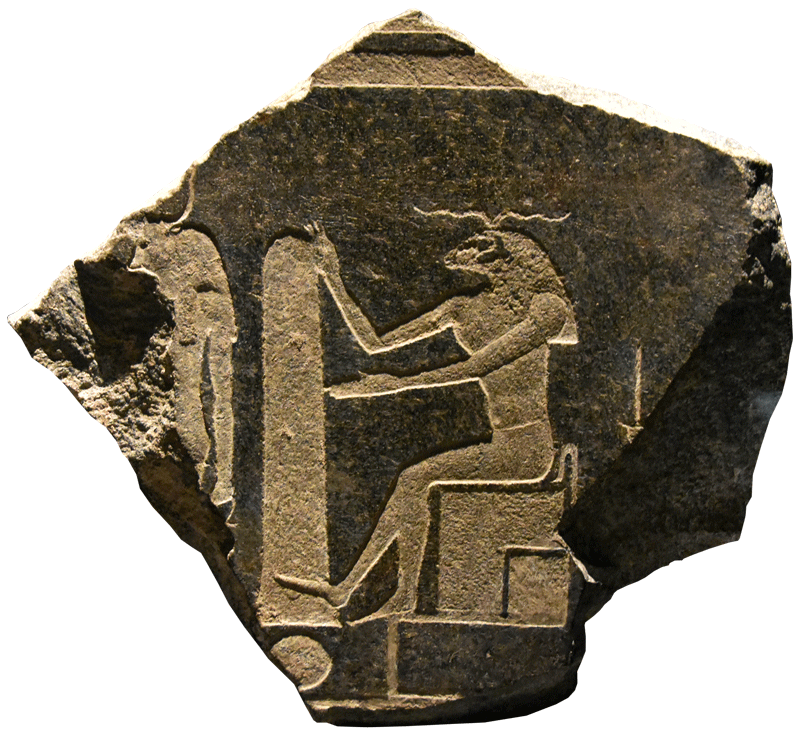 The Ba and the Ka formed the soul during a person’s earthly life and were separated after death. In the afterlife, the soul of the deceased was formed by the reunification of the Ba and the Ka, and was called the enlightened soul or Akh. The Ba and the Ka were united to resuscitate or alleviate the soul. A soul is enlightened or freed when the Ba reunites with the Ka and an enlightened soul made the deceased become part of the starry sky (Akh-Akh) together with all the other deceased, gods and birds. The ancient Egyptians believed that the Akh was still able to influence events on earth through illnesses, emotions, guilt and nightmares. The hieroglyph of the Akh is a crested ibis (image 2). 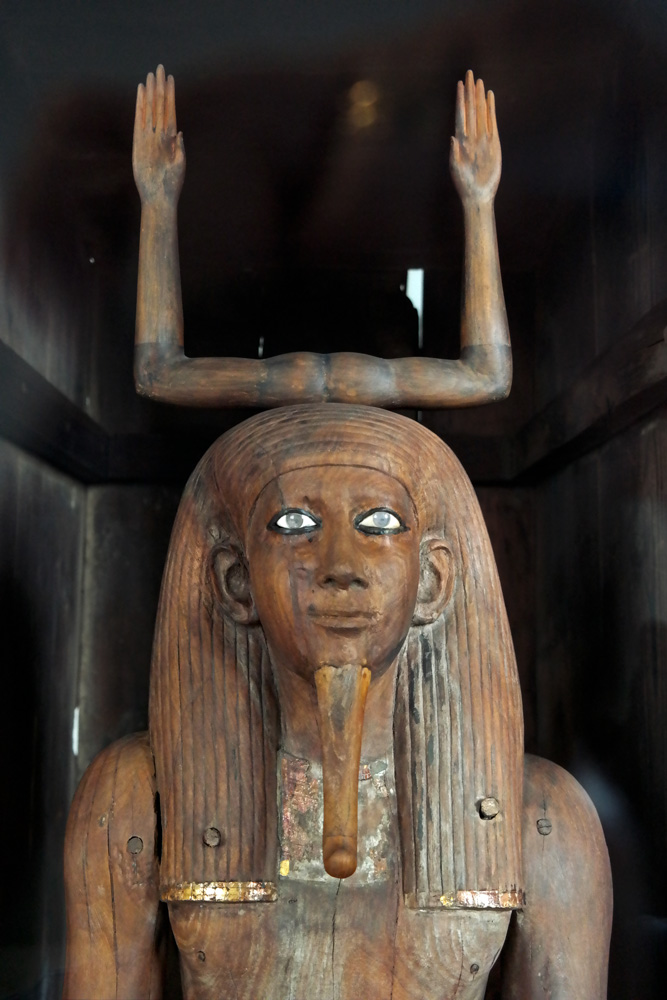 Actually, the Ka or spiritual part of the soul, symbolizes the life force of a person and was created at birth as the first breath of life by Khnum, a creator god from Egyptian mythology (image 3). The ancient Egyptians believed that Khnum was creating a child’s body on his potter’s wheel before it was inserted into the womb of the mother. Of great importance is that the Ka was associated with the first breath of life during childbirth. In essence, the Ka is the double or replica of the deceased, and therefore a statue that accurately represents the deceased is also called a Ka-statue in which the life force of the person in question can survive. When someone dies, the Ka leaves the body and remains in the deceased’s tomb and became the extension of one’s life. This extension of one’s life was thus represented as its double or Ka-statue in which the deceased’s life force continued to last as long as the statue remained in good condition.
The Ka is represented by two raised arms at an angle of 93 degrees which symbolize the life force of a human body and sometimes these raised arms are part of the Ka-statue. The famous wooden statue of pharaoh Auibre Hor from the thirteenth dynasty is a fine example of a Ka-statue in a perfect condition and is located in the Egyptian Museum in Cairo (image 4). In fact, a Ka-statue in perfect condition is a ‘living statue’ in which the life force of the deceased is still present. Such a statue is a remarkably powerful statue. 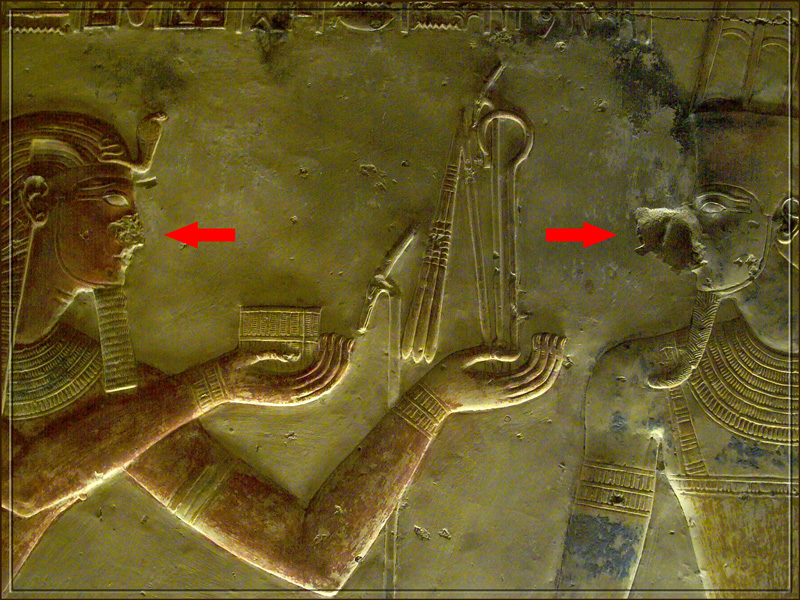 The Egyptian concept of life and death is very complicated and therefore there are several interpretations of the Ba, Ka and Akh aspects. It is a fact that the Ka statues are the so-called doubles or shadows of the deceased and that the Ka forms an important internal part of these statues and murals. For the successive pharaoh, it was therefore vital that these statues and murals could not exert any negative effect in the world of the living. Especially the world of the ruling pharaoh. The statues themselves were allowed to remain undamaged, only the Ka inside the statues had to be made harmless by ensuring that the Ka could no longer breathe and would die. Since the human nose is the main external respiratory organ, it was carefully removed to prevent the statue from ‘breathing.’ 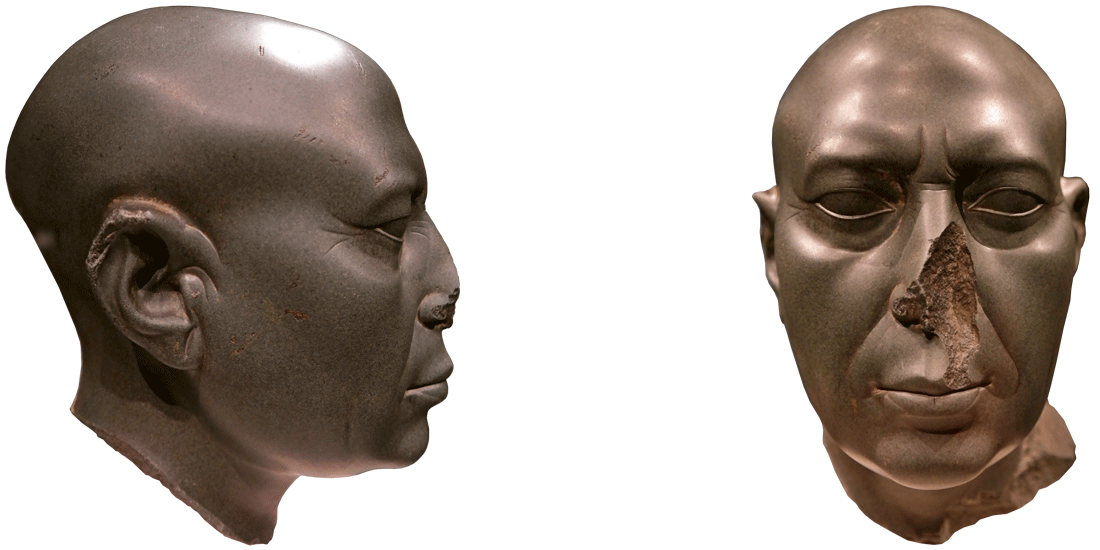 The removed nose as a symbol of the breath of life made the statue or mural harmless and made it impossible for a former ruler (pharaoh, priest or official) to exert any influence on the living. In fact, Ka means nothing but breath and removal of the nose was the only option to ensure that the Ka and the Ba could not reunite in the afterlife. There will be no resuscitation of the Akh and the influence of the deceased on the living is reduced to zero. A thus violated Ka-statue is therefore harmless. For this reason, the noses of the vast majority of ancient Egyptian statues, murals and wall reliefs have been removed intentionally. The first and last Breath of Life is the greatest secret of all and the only and shortest connection to our soul.

In ancient times, one believed that nasal breathing was ‘breathing into the soul’ in order to increase one’s Universal Life Force or Prana; the ‘shadows’ of individuals did not constitute an exception